Among the recent additions to the British Newspaper Archive was this Hawick Express issue of 29 November 1879.

FORESTERS’ FUNERAL – On Sunday last a large number of the brethren of Court Flower of Teviotdale turned out to attend the funeral of their deceased brother, George Cavers. Preceding the coffin, which was borne shoulder-high by four of their number, they went by way of High Street to Wellogate Cemetery, where, after the body had been committed to the grave, Bro. R. Waddell, C.R., impressively read the service for the dead prescribed by the order. Large numbers congregated at various parts to witness the cortege, and at the cemetery many gathered together to hear the service read.

From this report we know that the deceased man was a member of the Ancient Order of Foresters. This was established in 1834, and was a mutual aid society, providing financial support and savings options for members, in an era long before the British welfare state or readily available banking facilities.

A little genealogical digging identified the deceased man as 24-year-old waiter George Duncan Cavers, son of master tailor John Cavers and his wife Sarah Duncan. George had died of tuberculosis on 25 November 1879 at 2 Howegate, Hawick. He grew up in Hawick, but was born in Chelsea, Massachusetts, USA in 1855, where his parents had emigrated to. Sadly his father died not long after, and the widowed Sarah returned to Scotland and Hawick with her four surviving young children.

By the 1861 census widowed Mrs Sarah Cavers and her children were living in Langlaw Place, Wilton parish, Hawick. All but the eldest child had been born in America. Sarah Duncan or Cavers later married again, to a Thomas Rattray, engineman. Her daughter Janet Cavers returned to the United States, and married English-born Thomas Binns at Lowell, Massachusetts, in 1876.

This Cavers family was one of those descended from James Cavers and Isabella Coltherd, part of the line of their grandson Thomas Cavers (b. 1791).

The Radio Times is a UK radio and TV listings magazine which has been in print since the dawn of broadcasting in the UK, starting in 1923.

More recently an online digitised archive of its old BBC listings was created. This can be searched by keyword, meaning that it is possible to look for Cavers references.

Of course there is the usual problem of non surname results. Though unlike the British Newspaper Archive the issue this time is not Cavers the place name. Rather it is finding numerous references to potholers, people who explore caves!

Nevertheless there are useful surname references to be uncovered, albeit a tiny proportion of the 102 search results for “Cavers” (all meanings).

For example from 1924 and 1925 we find a Mr A.S. Cavers Secretary of the Yorkshire Agricultural Society appearing in the programme “Farmers’ Corner”, talking about “Clean Milk”. He was probably Adam Scott Cavers born in Yorkshire in 1854, son of Francis Cavers and Agnes Scott, but grew up in Hawick, after his parents returned to his father’s home area. He was an older brother of the Argyll siblings I blogged about recently. Later he appears living in Loughborough, Leicestershire, England, married with children. I suspect he was probably Adam S. Cavers whose death was registered in nearby Hinckley registration district in 1931, aged 76.

More recently, from the 1970s, 1980s and 1990s, we find actress Terry Cavers, accounting for 43 search results. She was a prolific performer on the BBC between 1971 and 1990, appearing in numerous plays and dramas, on television and on radio. Many were Scottish works, such as the “Kidnapped and Catriona” 1985 radio version of Robert Louis Stevenson’s classic novels. Likewise she appeared in the 1982 television series of Lewis Grassic Gibbon’s “Cloud Howe” and modern Scottish classic play “The Cheviot, the Stag, and the Black, Black Oil” on BBC One in 1975. From her entry in the Internet Movie Database (which also covers TV programmes) we find that she also appeared in ITV’s Scottish television stalwart “Taggart”.

Although Cavers people frequently turn up in the Hawick area and elsewhere in the Scottish Borders the surname rarely appears in much more distant parts of Scotland. So along those lines I was rather surprised to find a large Cavers household in 1891 Dunoon in Argyll, on the west coast of Scotland.

The household was living at a house called Ingleston in James Street, Dunoon. Living together there were two brothers and their families. Firstly William Cavers, aged 33, a boot salesman born in Yorkshire, his wife Georgean, and their children Francis and Agnes. Then also in the household were William’s younger brother John Cavers, a gardener aged 31, born Lincolnshire, plus his wife Sarah and their son Francis.

Although both brothers were born in England they grew up in Hawick, two of the children of gardener Francis Cavers and his wife Agnes Scott. I’ve blogged about this family before, including the circumstances of Francis’s death, and more recently discovering his illegitimate daughter.

William and family were still living in Dunoon in 1901 but John and family by then were in Leith, by Edinburgh. I have not traced either family further forward, though it should be possible to discover more about what happened to them afterwards.

I keep an eye on eBay for Cavers related artefacts. Usually my saved search for “Cavers” emails me about potholers, or – and surprisingly frequently! – “carver” chairs. But sometimes real gems turn up.

One item I got hold of recently was a baby photo of a young James Frederic Cavers, the photo taken in North Dakota, circa 1907. On the back of the photo a handwritten note says “To Aunt Mulla, Aint I kute in my pants & blouse?”. And above is noted “James Frederic Cavers age One year old”. 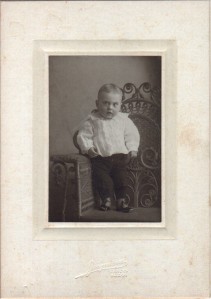 These clues were enough to identify the child, because he shows up in the 1910, 1915 and 1920 census returns for North Dakota, USA with his parents James and Martha, and younger siblings William, George and Ruth. The family were living in Churchs Ferry, Ramsey, North Dakota, with James Frederic born in North Dakota in 1906. His father James William Cavers was born in Iowa.

Although some American Cavers references around this period remain something of a mystery, I can confidently identify this family. The father was born in Iowa in 1870, the son of Scottish emigrants James Cavers (born Roxburghshire, son of Adam Cavers and Janet Clark) and Isabella Broomfield (born Berwickshire, daughter of James Broomfield and Janet Armstrong). For more information about this extensive Roxburghshire Cavers family see Jim Richmond’s Cavers site, including its page about the baby’s grandfather James who emigrated from Scotland.

From Ancestry.com member family trees here is a photo of baby James Frederic Cavers all grown up:

Ancestry trees also reveal that James Frederic Cavers married, and had several children, before dying in Minnesota, USA in 1974.